The story behind the story.

Inspired by the chickens my sister used to keep and the fact that she wanted three as the third was always ‘the safety chicken’. Just In case something happened to one of them.

I’m also tickled by the idea of chickens having far more intelligence than they are normally credited with.

So, without further ado, I give you:

Mr B. and the ‘Safety Chickens’…

This is a story about three chickens and one fox, who over a time, develop a ‘grudging’ respect for one another.

First let me introduce you to, Mr B as he likes to be known. An urban fox, well used to and well suited to life in the city.

“Hello, my name is Bernard, though I prefer to be addressed as Mr B and I am a rather clever and resourceful fox, even if I say so myself.

Must say I love city life, it’s so much easier, than living in the country. Moving here was certainly, one of my better decisions. Food is far more accessible and just easier to get.

I have made my own home and space carefully hidden in the same garden as three chickens.

I say pesky, because despite my best efforts, I have yet to gain access to their coop or lay a single paw on them. Not for want of trying I can tell you”

Now let me tell you a little more about the chickens, firstly their names, Hannah, Holly and Henrietta.

Three rather special chickens, also well used to life in the city. The traffic noise, the hustle and the shenanigans of the urban foxes. And as it turns out, they are a very good match for Bernard, despite his best attempts to keep them under continual surveillance. 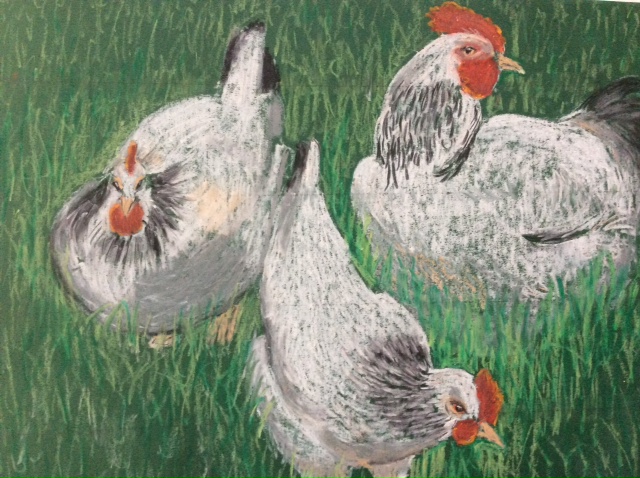 So, let’s go to them directly, to hear what they have to say….

Henrietta: – ” ‘Does he ever get bored of watching us, all the time?”

Hannah: – “No I don’t think so, though I wonder how much he knows about what we are really doing?”

Holly: – “Enough I think to realise that we are no ordinary chickens. he’s probably worked out that we have learnt to strengthen our coop. He barely bothers to come near it, these days.”

“Hmmm, still we can’t take anything for granted ” – Hannah

They are also always busy doing something, they are never alone and never still. In fact, half of him wonders if it is still worth trying to catch them, as over the months he’s noticed a physical change in them.

So, back to Bernard, to hear what he has to say: –

“It’s almost as if these chickens know that the fitter they are, the tougher they are going to be to catch and eat. Every day I see them they are doing something physical.

They also seem to spend a lot of time, pecking around the humans and their machines and generally getting under their feet”

Bernard is genuinely perplexed by the behaviour of the chickens, he has a hunch that something is going on, but can’t quite put his finger or ‘paw’ on what it is.

Unfortunately for him, he just happens to be sharing the garden with three of the leanest, meanest, most physically fit chickens he will ever come across.

They are clever and cunning and at this moment in time are quite frankly running circles around Bernard.

They are determined to avoid being caught and eaten, and so between the three of them have devised a strict regimen of physical and chicken brain training to keep them alert and one step ahead of Bernard.

So, let’s go back to our three chickens and hear what they have to say:

Henrietta: – “Absolutely, we realised a long time ago, that we couldn’t rely entirely on the humans to keep us safe. Must give Mr B, his due, out of all the foxes we’ve had to deal with over the years he has probably come the closest to breaching our defences.”

Hannah: – ” Yes, he has, I’m even wondering if he’s finally realised how we learnt to strengthen our coop.”

Indeed, this is true, Bernard has noticed how frequently the chickens scratch around the humans, whenever they are in the garden, appearing to do what chickens normally do.

In fact, what they are really doing, is busily learning more and more about the human machines and how to use them.

Where else would three chickens have learnt to fortify and strengthen their coop? Bernard is a pretty intelligent fox but so far, he has been unable to find any weakness, no obvious way into their coop.

It hardly seems worth the effort of checking these days……

“I can’t swear to this but I’m sure I’ve seen them trying to use the human machines.

I’m convinced that their forays towards the humans and their things are not entirely random or accidental. Those three are definitely, up to something.”

Poor Bernard, you almost feel sorry for him, well almost……

Our three chickens know they can’t take anything for granted, as far as Bernard is concerned. They hold the firm view that he will never give up, that is just what foxes do.

Because of this they are highly disciplined about checking the coop every day for any signs of damage. And punctilious about their daily exercise regime.

They believe that these days there’s a lot you need to learn and do to survive, as an urban chicken. It’s a tough world out there.

Luckily for them the humans quite often work outside in the garden, with their laptops and our ‘clever’ chickens have learnt to ‘google’ and cover their tracks whilst extracting the information they need.

‘Too tough to eat and too clever to be caught’

And for the moment this is working for the them, I guess only time will tell if this changes.